Wild Turkey is a popular Net Entertainment slot that – would you believe it, features around… a Turkey.

While this isn’t one of the most common themes we see in video slots, it’s one that Net Entertainment have managed to pull of pretty well, and the game’s playable from just £0.20 a spin, with the max spin capped at £100. The game uses 20 fixed pay lines, and with a jackpot of a whopping 4000 coins, it’s no surprise to learn that this has fast become one of the software providers most popular and commonly played titles.

The entire game is designed to look what we assume is cross between a farm, and a place where escaped, free turkeys can do whatever they want – and yes, we are aware that the game is starting to sound a little weird. 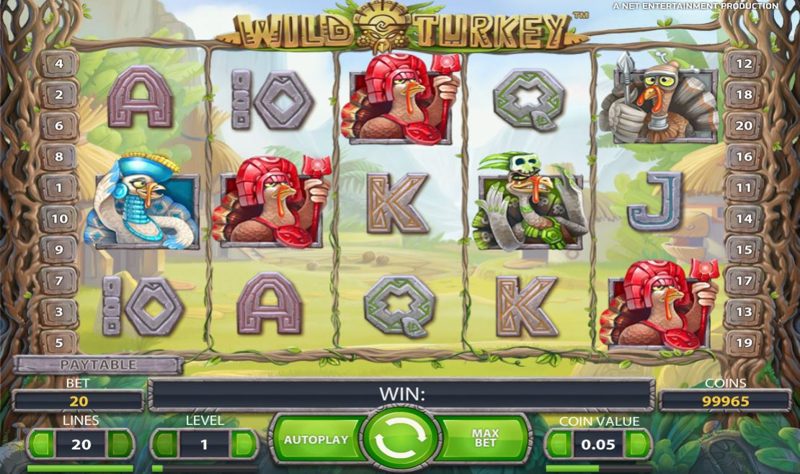 Wild Turkey is available to players on both desktop computers and laptops, and mobile phones and tablets – and there’s very little difference between the mobile version of the game and the desktop version. Thanks to Net Entertainment’s state of the art development process, mobile players can enjoy all of the same functionality regular web based players can, and that’s something you can’t say about most software providers.

The reels contain a selection of symbols, including the lower paying ones – which, in line with Net Entertainment’s “norms”, are playing card symbols – alongside the game specific high-paying symbols, which includes an emperor Turkey, a tribesman Turkey, witch doctor Turkey, a sailor Turkey, and a Zulu Turkey. Interestingly, there aren’t any bonus or scatter symbols in play, and this is one of the only Net Entertainment video slots not to include such symbols – but as you will soon see that there is a good reason for this.

The other symbol to keep an eye out on is the wild symbol, and this is important primarily because it is the way that you trigger the feature. More on that below.

Wild Turkey allows you to win either 15, 30, or 60 free spins, by landing the wild symbol fully in view on reels two, three, and four simultaneously. One fully stacked reel awards 15 free spins, so if you’re lucky enough to get all three reels landing at the same time with wilds on, you will be awarded the full 60 free spins.

During the free spins, it’s worth keeping your eyes on the wild symbols, because now, stacked wilds can appear on all five reels, and if you are lucky enough to land just a few of these, you’re going to be in for a big payday, and get ever closer to reaching the massive jackpot of 800,000 coins that Wild Turkey offers to players.

There is also the ability to retrigger the feature during the free spins, although unfortunately, you won’t be able to win anywhere near as many spins as when initially entering – in order to retrigger the feature, you’ll need to land one of the stacked wilds. You will then be awarded two additional free spins, and with no limit on how many spins you can accumulate, the free spins round can go on for quite some time indeed.