Koi Princess is a Japanese-inspired Video Slot from Net Entertainment, that uses one of the most cultural, historic icons from the orient; fish!

While Koi Princess doesn’t feature the most up-to-date or state-of-the-art designs, it’s simple, and it works; Net Entertainment have clearly tried to create a recognizable Japanese environment within the game, and from the Japanese writing, to the musical sounds, everything fits in well with the Asian culture. 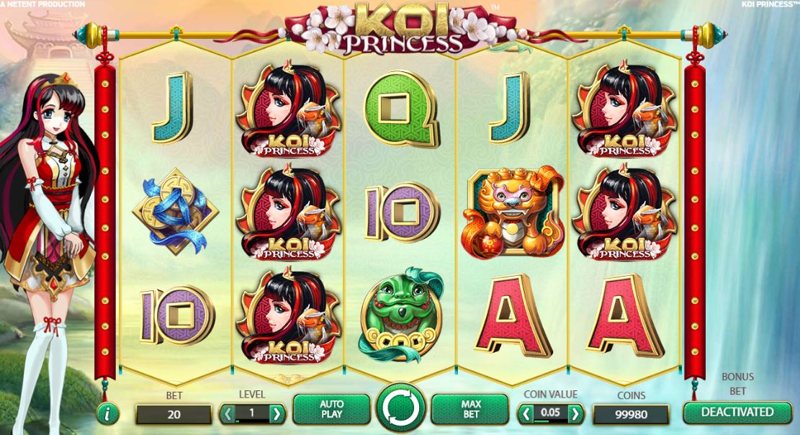 There’s a ton of features, random events, and bonuses in Koi Princess, and it’s one of the reasons the games become so popular. Below, we’ll look at the bonuses and features you’ll find, as well as explaining as the “Bonus Bet”, which confuses many new players.

Koi Princess sounds a little confusing, but once you get the hang of it, it’s a great laugh to play, and while it’s a low-variance slot, the features are triggered often, ensuring you don’t endure long, boring sessions with no wins, or action.

Before you start playing, you’ll see a button on the bottom-right-hand-side of the game screen, called “Bonus Bet”. By default, this button is toggled to the “off” position. If you decide to play with the bonus bet active, you’ll need to click this button.

In doing so, your stake will double, without the payouts increasing, however; activating the bonus bet greatly increases the chance of landing the bonus, as well as the base-game random features, and it’s generally recommended you do play with it on.

On any spin, the Fish Feature can be triggered randomly, and when it does, three fish will pop up from the bottom of the screen. You’ll then have the option to pick one of the fish, which will reward one of the following:

The main bonus-round in Koi Princess is triggered by landing three of the scatter symbols on reels 1, 3, and 5. (There’s also a second-chance bonus, which randomly triggers if you only land two of the scatter symbols, giving you another chance to win the bonus). Once you land the bonus-round, you’ll be taken to a wheel, that, after you’ve pressed “Stop”, will land on one of the main bonuses; this is then the bonus-round you’re awarded. The different bonuses that can be won are shown below: