Guns N’ Roses are one of the biggest, and most well-known rock bands in history, and their influence on the music industry is hard to put into words. Originally formed in 1985, Guns N’ Roses changed the music scene forever, with their continual hits, and to date, they’ve sold over 100 million records across the world, making them one of the world’s best-selling bands in history, second only to the likes of Elvis Presley, the Beatles, and Michael Jackson. 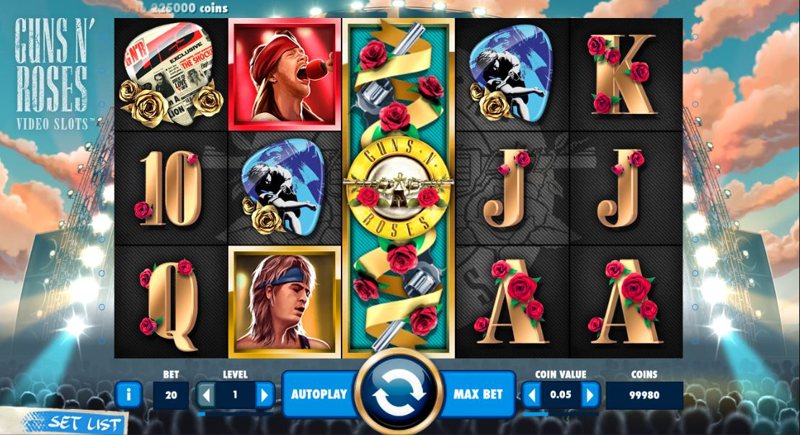 The game layout itself is made up from 5-reels, and 20-paylines, with the reels set on a background showcasing a stage, and a large crowd. Design wise, it’s fairly generic-Net Entertainment… but what’s super cool, is the “Set List” button on the bottom left-hand-side of your screen. Toggle this button on/off, and you’ll be able to hear some of Guns N’ Roses biggest hits while playing, including Sweet Child of Mine, Welcome to the Jungle, and more.

However, it’s not just the audio that Net Entertainment have got spot on with this game; the display and rendering of the Video Slot is second-to-none, and just watch how the reels spin, and you’ll notice how smooth, and lag-free they run. Plus, Guns N’ Roses is fully mobile-optimized, meaning you can play the game from almost all mobile phones and tablets. 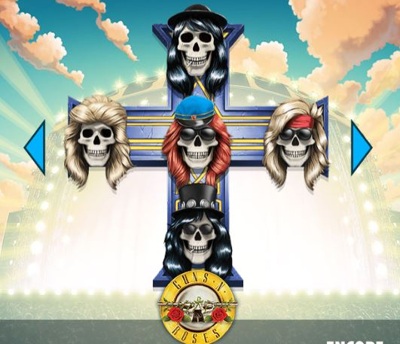 The first feature is randomly triggered during the base-game.

When activated, a large wild symbol, in a “X” formation (5 wilds in total) will appear in the centre of the gameboard, helping substitute for all symbols. 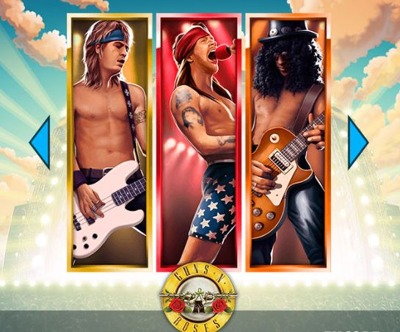 The second feature is again, randomly activated within the base-game, and awards you three free-spins. 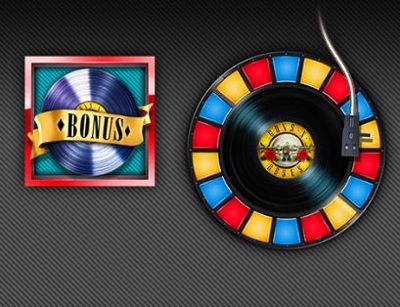 This is the “main” bonus, and it’s the Bonus Wheel that grants entry to the two main features. To play the Bonus Wheel, you’ll need to land three of the bonus symbols (which look like Vinyl’s), on reels 1, 3, and 5. Once you do, you’ll get to spin the wheel, which will award one of the following prizes: