Starburst is one game that players either love or hate. It really does bring out that marmite-like emotion from players, and while it’s not the most intuitively designed game we’ve seen from Net Entertainment, it is a good laugh, and can offer decent wins, despite the low-variance of the game.

There’s not a whole lot to look at, admittedly, but you’ll see the design of the game is in-line with an arcade kind of game – almost Bejewelled like. 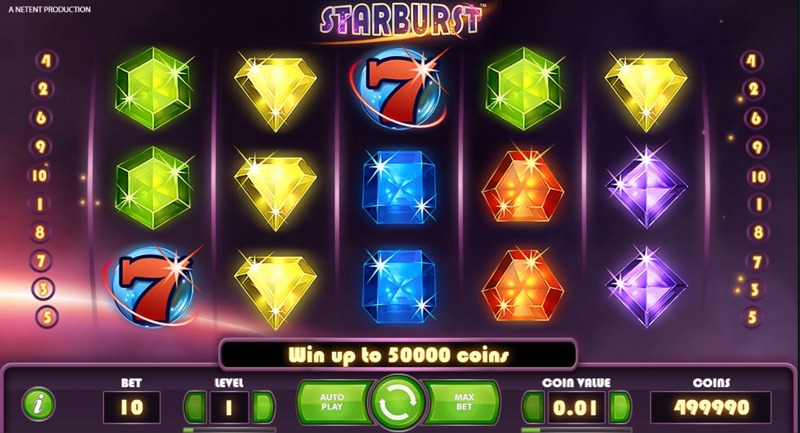 Players used to be able to adjust the number of pay lines on the game, and this was commonly used to get rid of a remaining few pence on a bonus balance. It also meant that players could spin from just £0.01 per spin – and while that may be great for players who have a maximum win of £50 in their sights, most players prefer the option to win four… even five figures – and that’s one of the reasons why Net Entertainment recently removed the option to adjust the number of pay lines.

(Of course, the online casinos didn’t have any say in that)

All the other ‘classic Net Entertainment’ game options are available however, with an audio slider, graphics-adjustor, and ambient sounds toggle available from the settings menu. You’ll also see the (what’s now pretty much a global feature of all slots) “Max Bet” button alongside the spin button, and there’s also an AutoPlay function available, allowing you to set a pre-determined number of spins to play out automatically, up to a maximum of 100.

There’s also Starburst Wilds present on the middle three reels (more on these in the section below), and you’ll want to keep a close eye out for these, as they make up the main bulk of the game, and trigger the feature. 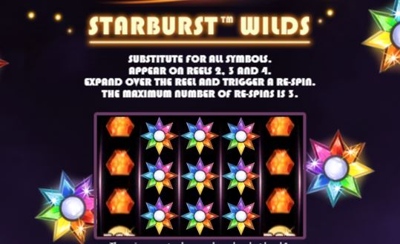 Starburst also has a re-spin feature, and this is triggered by landing one, two, or three of the Starburst Wilds on the middle three reels. When you land one of the special symbols, it will then expand, to take up the full reel, and the game then awards you a free re-spin, with the wild reel stuck in place.

Now, if, on the re-spin, you land another Starburst wild, it too expands over the whole reel, and awards another re-spin! It’s possible to get up to three re-spins (so all three middle reels are fully-wild), and if you manage to do so, you’re in for a decent wedge of cash. 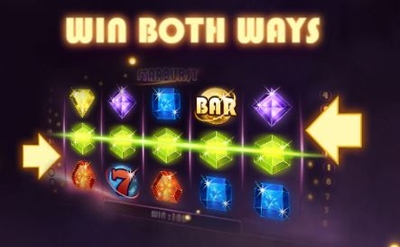 There’s no real bonus-round in Starburst, but it is unique in the sense that it pays both ways. This means, you get paid from right-to-left, and left-to-right… and this means getting 5-of-a-kind is twice as nice.

That’s pretty much it for Starburst, and unfortunately there’s not a lot else going on, aside from energetic, pop-like music, and bright, bling-inspired graphics.