Space Wars is a futuristic video slot from Net Entertainment, and is one of their most recognisable titles, thanks to the unique purple layout that greets players upon opening the game – oh, and I suppose the weird -looking aliens on the reels, and the creepily designed air chamber on the right-hand side of your screen help add to the weirdness. 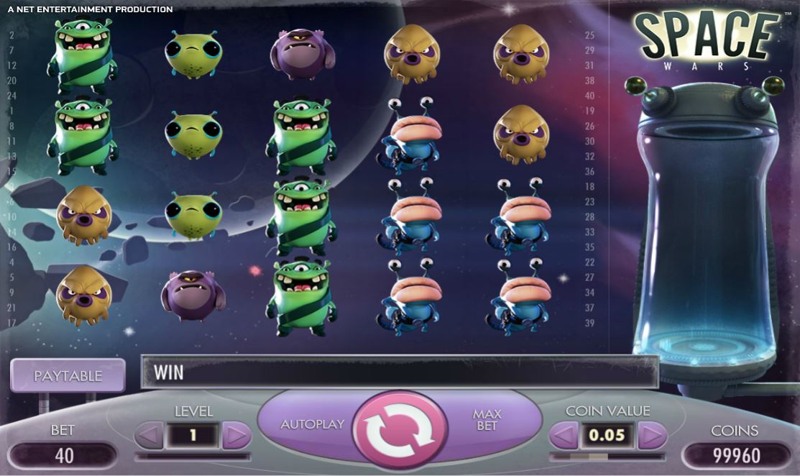 While the game can certainly take a bit of getting used to, it’s incredibly enjoyable to play, and as you spin the reels, you will follow a selection of alien-like creatures as they fight to take control of the sacred crystal – the highest paying symbol within the game. The other symbols include the aliens themselves, and while they’re all fairly low-paying, thanks to a unique bonus round, it’s possible to win very, handsomely as you’ll soon see.

Now, Space Wars differs from many of Net Entertainment’s most well-known video slots in the fact that it uses 40 pay lines instead of the classic 20, or 25. The increased number of pay lines does mean that wins are typically a little smaller than a game variation with fewer lines, but generally speaking it works out relatively, because of course there’s virtually double the amount of chances if you win.

What’s interesting about Space Wars, is that there isn’t a bonus round or free spins feature per se – and instead, Net Entertainment have combined in game features with a bonus round to present what is quite possibly one of the most unique and exciting bonuses we’ve seen in a while.

Any time you manage to get a win – it doesn’t matter how big, or how small – any win will do – you will see the symbols that contributed to the win become compressed within the air chamber on the right-hand side of your screen. A fancy animation then plays out, of these symbols teleporting out of the chamber onto the reels, and what’s really happening here is that each reel is becoming stacked with more of the chosen symbol than normal.

This allows you the chance of landing an entire screen of the “now-bonus” symbol, and greatly increases the odds of you landing 4-of-a-kind and 5-of-a-kind pay lines. All of the symbols – bar the wilds – can trigger the in-game feature like this, and of course if you are lucky enough to get a win using the crystal symbol, the scope for winning big is phenomenal, with a full screen of crystals paying out a whopping 400,000 coins – potentially life changing money if you’re playing at a fairly high stake.

In terms of bonuses, that’s it for Space Wars, and while it might seem a little scarce at first, it is important to realise, that thanks to the feature landing on any win, it actually triggers quite regularly, and while it won’t always be a hugely-profitable re-spin (it can award zero), all you need is that one big hit and your session can go from average, to gigantic, in a matter of seconds.