Everyone’s heard of Jimi Hendrix, and this era-defining American singer, songwriter, and guitar player wrote some of the most popular songs of the 70’s, with Purple Haze, Voodoo Child, and Foxy Lady being just three of the hits he wrote. 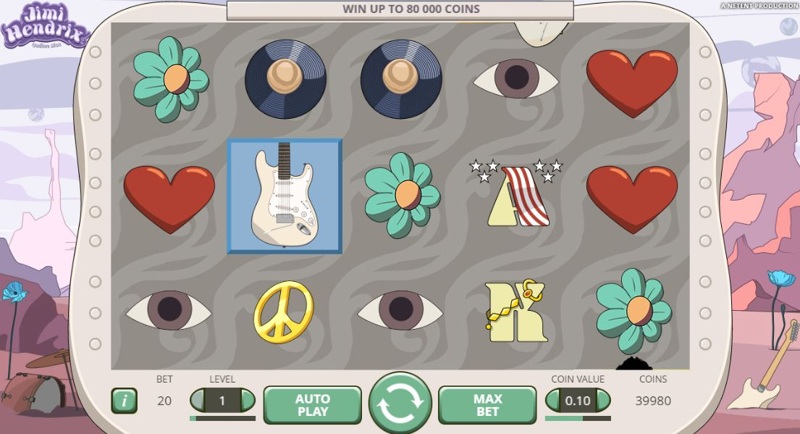 Net Entertainment decided to create a Video Slot all around the iconic figure, and “Jimi Hendrix”, as it’s called, is one of the finest additions to the Net Entertainment Video Slot range, thanks to it’s exciting gameplay, great range of features and bonuses, and inspiring design, audio, and animation work that’s gone into the game.

Featuring a hippie-like design, Jimi Hendrix: The Video Slot uses a combination of playing card symbols, and game specific symbols, with the high-paying symbols including a White Guitar, a Peace Logo, a Heart, a Vinyl Disc, a vibrant Flower, an Eye, and a Red Guitar.

Jimi Hendrix himself is the wild symbol, and there’s also a scatter symbol, which is a cartoon-like image of the man himself playing the guitar. 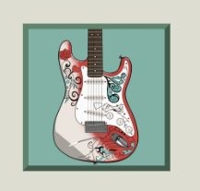 If you land four or more of the Red Guitar symbols anywhere in view, you’ll be awarded a free re-spin, with the Red Guitar’s locked in place.

If, on the next spin, you manage to land more Red Guitars, they too lock in place, and you’re awarded another re-spin, and this continues until you don’t land anymore; after this, the wins are paid, and if you’ve hit 5-of-a-kind, you’re in for a massive base-game payout. 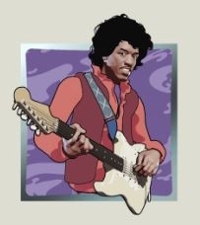 Triggered during the base-game, you’ll need to land the rare Purple Haze symbol on reel one to active this bonus.

Do so, and for that spin, all the traditional playing card symbols, including 10, J (Jack), Q (Queen), K (King), and A (Ace) will become wild, substituting for all the high-paying symbols. 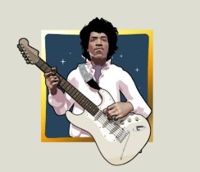 This is the main bonus-round, and the one you’ll want to aim to hit! To trigger it, you’ll need to land three of the scatter symbols on the last three reels (reels 3, 4, and 5); when you do, you’ll then be taken to a “Pick Me” style of game, where you’ll pick from a variety of rocks, to uncover different free-spins options. There’s four different types you can win, and you simply keep picking until you’ve matched three of the same colour – after that, the free-spins begin. The different options you can be awarded are shown below: